posted 10-15-19 11:51 ET (US)
I have the GOG version which did work on my Win10 machine about a year ago when I last played. Now I wanted to play again and it gives me the following error message upon startup: 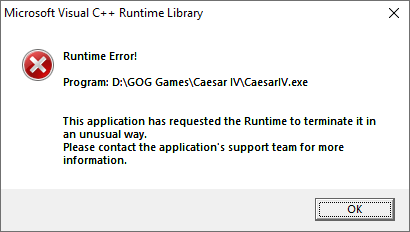 Furthermore, every time I try a log file is created in the game directory with the following content:

Anyone else having the same/similar issues, and/or a possible solution? Of course I already tried several compatibility mode settings, running as admin etc etc to no avail

Apparently there was a major Windows update a while ago because several other programs suddenly stopped working. I guess some functionalities were removed in order to close a security gap or something along these lines
Author
Replies:

reboot, uninstall and reinstall C4 is a last ditch effort. Perhaps the registry got mangled months ago.

Apparently there was a major Windows update a while ago because several other programs suddenly stopped working. I guess some functionalities were removed in order to close a security gap or something along these lines

I had purchased Caesar 4 on Steam and the game was working at the time.

Fast forward to a couple weeks ago, I wanted to play C4 again (for the nostalgia) and game won't launch

Tried lots of suggestions from youtube, even a OS reinstall.

On these forums I downloaded the game demo, thinking that might work, and it did - up until loading the game map. Then crash. The demo download prompted me to install the latest version of directX so maybe that had something to do with it since I can launch the game on Steam as well, up until launching the game map.

Prior to this, I've been getting the Runtime Library error for Microsoft C++ message.

Any suggestions or experience with this? Steam won't refund the game and my laptop is current (I would imagine so, running a 2006 game on a 2018 machine!)

I did a bit of a search and came up with a few things.

And I assume that you've waded through this one : https://steamcommunity.com/sharedfiles/filedetails/?id=754778695

I don't have Win 10 (hanging on to Win 7 for as long as possible). Is there a Win 10 equivalent of the Win 7 'reliability history'? If you can find and check this it may show what the actual problem is.

Thank-you for the suggestions. I have no clue what this means:

"Find and run RegisterDLL.bat as an administrator"...
but I tried it and at first it appeared as if the map was about to crash again, and then sure enough the Mediolanum map opened.

The directX download says that I have an up to date version and don't need to download anything.

The game screen is smaller than my actual laptop screen though. I guess I'll play around with it now and see if it'll crash again for whatever reason.

Thanks again for your help.